Deputy Finance Minister, John Kumah has stated that both the New Patriotic Party (NPP) and the National Democratic Congress (NDC) must take the blame for politicising issues pertaining to fuel in the country.

The cost of fuel has, over the years, been one of the political subjects in the country, with successive governments making promises to keep fuel prices low.

Speaking to Animwaa Anim-Addo on the AM Show on Tuesday, December 7, Mr Kumah argued that the NDC cannot fault the government for the recent trends in petroleum prices because they are equally guilty.

“That’s a very difficult issue and I am happy that when it comes to fuel, NPP and NDC are all guilty of fuel politics. Unfortunately, if you look at the global trend, and here [when] we talk about COVID-19, our friends disagree but this is actually what is happening.”

“America has announced that they were going into their reserve to also supply fuel to bring down the prices. These are things that usually, as a country, you may not have control over and once we have all submitted to deregulation and say that if it goes up, it goes up; if it comes down, it comes down, these are some of the prices we pay,” he explained.

Fuel pricing in Ghana is deregulated, meaning prices at the international market have direct impact on prices locally.

That notwithstanding, currency depreciation and taxes also have significant impact on the fuel prices.

According to John Kumah, government is utilising all possible avenues to resolve the price fluctuations, adding that “it’s not like we have the comfort to do it and we are ignoring, that is not the situation; if government intervenes at this level to say that instead of selling at 6.9 or 6.7, do 6.7, what it means is that government has to look for resources to cushion the deficit or the balance.”

“For instance, we expect the world prices to come down because the US is intervening by also joining the supply chain. If these things begin to happen, you’d see the drop from the $90 downwards and that would have resulted in the same changes that we are talking about without this cost that government has to bear,” he noted.

Commercial drivers laid down their tools on Monday, December 6, leaving many commuters who use public transport to and from their various destinations stranded.

They were appealing for the government to scrap some taxes on petroleum products in order for fuel prices to be reduced at the pumps.

After a crunch meeting with the driver unions, the government has directed the Ghana Oil Company (GOIL) to reduce price of fuel at the pumps. 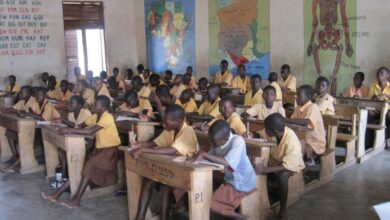